In March of 2019 a small team of researchers led by Steve Sillett – a world-renowned old-growth forest canopy researcher from Humboldt State University – came to Mitteldorf Preserve to climb and study the Dewing Redwood. This large, ancient redwood across from the lodge is named after Harvard Professor and author Arthur Stone Dewing (b. 1880 – d. 1971).

The tip of the core sample taken by the team dates back to the 12th century, yet there was approximately 57 centimeters more to go to the center of the tree. Based on formulas created from the extensive tree mapping they have done, Steve Sillett’s experts estimate that the seedling would date back to the 8th century (+/-30 years). This means the Dewing Redwood was a seedling in 734 AD! The Dewing Redwood is at least 1286 years old and that makes Mitteldorf Preserve the home of the oldest redwood tree south of the Santa Cruz Mountains.

They calculated that the tree has 500 million needles with a needle surface area that would cover 1.2 acres. This gives you a sense of how much capacity the Dewing Redwodd has to combat climate change by pulling carbon out of the air and locking it up in its body.

They also found evidence in the tree that it was spike-climbed in 1923 and someone had very carefully and expertly removed dozens of dead branches from the crown. This redwood was particularly impervious to recent droughts and the Soberanes fire that scorched its base and remains steady.

The next time you're out at Mitteldorf standing under the giant Dewing Redwood, think about all the fires, storms, wild things, people, dramas, and stories that it has experienced. You may even take a moment to reflect on how that makes you feel about your own life. 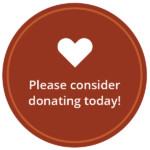 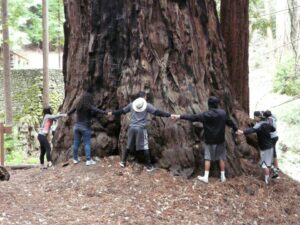